Politics West Africa
Abuja – Former Governor of Edo, Comrade Adams Oshiomhole, has been sworn-in as the new National Chairman of the All Progressives Congress (APC) at the party’s on going National Convention. 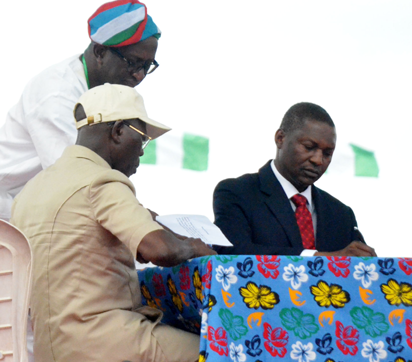 3. National Chairman of APC, Comrade Adams Oshiomhole (R), being sworn-in by the Minister of Justice and Attorney-General of the Federation, Mr Abubakar Malami, during the 2018 APC National Convention in Abuja on Sunday (24/6/18). Read more at: https://www.vanguardngr.com/2018/06/oshiomhole-sworn-apc-national-chairman/

He emerged after an affirmative vote by the party’s delegates from the 36 states of the Federation and the Federal Capital Territory at the party’s National Convention which began on Saturday in Abuja. Oshiomhole became the sole chairmanship candidate before the convention after his opponents, Prof. Oserheimen Osunbor and Chief Clement Ebri, both former governors of Edo and Cross River, respectively, withdrew from the race. His election, along with those of 18 persons for other positions, without opposition, was announced by Chairman of the Convention Organising Committee, Alhaji Mohammed Badaru, who is also the governor of Jigawa. The former labour leader will succeed compatriot and also a former governor of Edo, Chief John Odigie-Oyegun, whose tenure as national chairman of the party, ends on Monday. 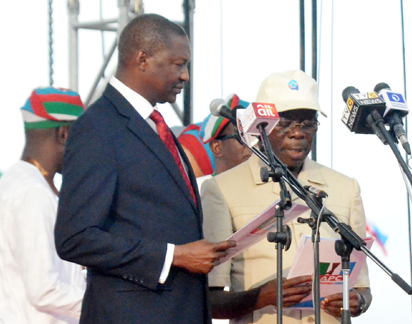 National Chairman of APC, Comrade Adams Oshiomhole (R), being sworn-in by the Minister of Justice and Attorney-General of the Federation, Mr Abubakar Malami, during the 2018 APC National Convention in Abuja on Sunday Read more at: https://www.vanguardngr.com/2018/06/oshiomhole-sworn-apc-national-chairman/

Those returned opposed, including dissolved National Working Committee (NWC) members, are Alhaji Mai Mala Buni (National Secretary), Mr Niyi Adebayo (Deputy National Chairman, South) and Alhaji Manasara Sani (National Vice Chairman, North-West). Others include Mr Bankole Oluwajana (National Vice Chairman, South-West), Mr Babatunde Ogala (National Legal Adviser), Alhaja Ibrahim Masari (National Welfare Officer) and Mr Jock Alamba (Deputy National Welfare Officer). It would be recalled that the National Executive Committee (NEC) of the party at its meeting in February, attended by President Muhammadu Buhari, passed a resolution extending the tenure of the NWC by one year, beginning from June. But, Buhari, at another NEC meeting shortly after, insisted that the party should organise a National Convention at the expiration of the NWC’s tenure.
He said that he changed his position on the tenure elongation of the NWC because he had been informed that it negated the party’s Constitution. After the announcement of the election of the unopposed candidates, polling was held for eight positions – National Organising Secretary, National Woman Leader, Deputy National Chairman (North) and Deputy Vice Chairman (North-East). They also included positions of National Vice Chairman (North-West), National Vice Chairman (South-South) and National Publicity Secretary. However, results of the polling which began at about 4.30 p.m. on Saturday, with intermittent disruptions over delegates’ lists, especially from states that had parallel congresses, were still awaited as at 5 p.m. on Saturday. Indeed, voting by delegates from Imo was stopped following fierce altercations over which list from the state would be honoured with privilege to vote.
The same situation played out in Delta stand where members twice, Saturday and Sunday morning, tried to settle the logjam through fisticuff, but for the intervention of security agencies. News Agency of Nigeria (NAN) reports that President Buhari, who left the Eagle Square at about 5 p.m. on Saturday, after casting his vote, returned to the convention arena at about 12.15 p.m. on Sunday. The president was said to have come to witness the swearing-in of the new national officers of the party, but had to go back to the Villa at about 1.20 p.m. when it became obvious that results of the elections were not ready. Chairman of the convention committee, Badaru, had, shortly before the president departed, apologised for the delay and pleaded for more time to tidy outstanding issues to enable the results to be announced. (NAN)