LUCAS DIGNE HAS said goodbye to Barcelona and the club’s fans as he nears a move to Everton.

The 25-year-old left-back is heading to the Premier League after the Toffees agreed to pay the Catalan side £22 million (€25m) to sign him this summer.

Digne made 46 appearances over his two seasons since joining from Paris Saint-Germain, playing just 12 times in La Liga last term as he was unable to dislodge Jordi Alba from the left-back slot.

Despite his limited role, the France international was grateful for his experience in the Spanish top flight and wished them all the best for next season.

“The last two years have been a childhood dream that I have been able to realise,” the France international wrote on Instagram. ”I want to say thank you very much to all.

“First, to the club that has given me everything since I arrived.

“Thanks to all the physios, the staff I have worked with, the coaches, the security people, the kitchen staff and all who make sure the club is a family

“The crowd that is always behind the team and that has given me a lot of warmth during the last two years.

The city of Barcelona that will always stay with me for what I have lived and for the people who are always incredible.

“And finally my colleagues, who before being the best players in the world are amazing people who always help you.

“All this to say that Barca is more than a club, it is an incredible family.

“A very strong hug to you all and a lot of luck for the season.”

Digne will be Everton’s second signing of the close-season transfer window, as the club have already lured Richarlison to Goodison Park from Watford for £40m (€45m). 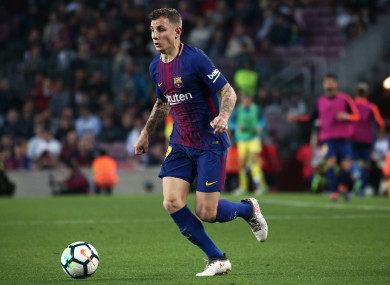