Essam El-Hadary has become the oldest player in World Cup history after being named in Egypt’s starting XI against Saudi Arabia.

Egypt’s 45-year-old captain was an unused substitute in the opening two games but has earned a start for the dead-rubber in Volgograd.

El-Hadary made his first professional appearance in 1993 for local club Damietta and played his first game for Egypt three years later. 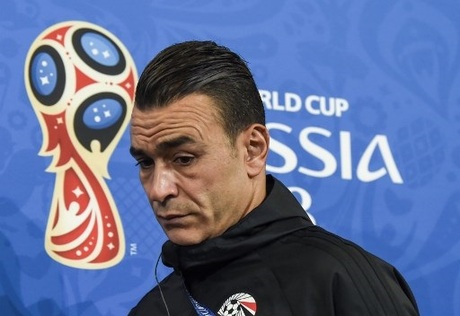 He will make his 153rd appearance for his country on Monday against Saudi Arabia, who are also searching for a consolation victory as their World Cup campaign comes to an end.

Egypt were without Liverpool sensation Mohamed Salah at the start of the tournament and in his absence suffered a 1-0 defeat to Uruguay.

Salah started against Russia last Tuesday but was unable to make an impact as the hosts ran out 3-1 winners.

Ahead of the Group A match against Saudi Arabia, Egypt boss Hector Cuper said: ‘This is an important match because we want to win and finish with a good result.

Egypt have already being knocked out of the World Cup (Picture: Getty)