‘Angels Are Warming Up For You’ – Rev. Father Mbaka to President Buhari

Reverend Father Mbaka has come with more messages for President Buhari again. This time he claims to have seen disaster coming and that Angels are warming up to receive the President.

Father Mbaka in a live sermon from his Adoration Ministry church affirmed the following on Sunday according to one of his church members who decided to share some excerpts of the message on social media.

Father Mbaka said amongst many other things that President Buhari had no reason to put a stop to the killings in the country because he was a former coup plotter; Mbaka says otherwise he would have identified the killers ravaging the country by now. 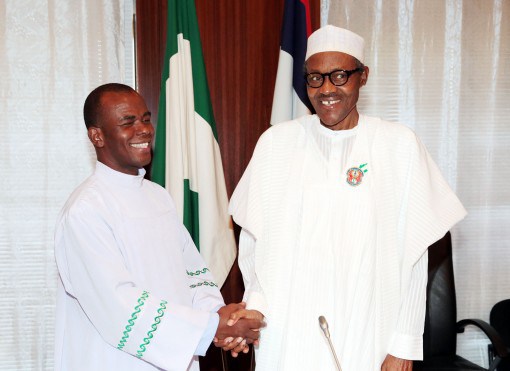 He continued further that the president would have personally gone to Benue if it was Imams that had been killed. Mbaka accused the president of deliberately avoiding Benue stating that he had no reason not to have attended the burials of victims of violence in Benue.

Below are excerpts from the message:

1. President Buhari,a former coup plotter has no reason not to stop the ongoing killings in the country.He has no reason to not have identified the killers.

2. According to him,had it been that it was Imams that were killed in Benue or Plateau,he would have attended the burials.He has no reason not to have attended the burials of those killed in Benue.Supernatural disaster is coming.Angels are already warming up.Nigerians should not worry.One day there will be vacancy from Abuja.The jet will park and nobody will use it unless they repent.

3. He said that Buhari has declared 2019 presidential ambition as if he knows what will happen between now and Christmas. He said he is just a microphone, speaking as directed by God.Anybody who plans to attack him because of his message will fail.

4. He also said that when Buhari was ill,he spent months in abroad.When his son had accident,he travelled outside.But when a mere Nigerian is ill,he gets treatment from our poorly equipped hospitals.The senators who would have intervened were silent because they need favour from Buhari.

5. He said when the disaster comes,President Buhari will cry. According to him,Buhari is like an egg.The sheep are crying while the shepherd is doing nothing.A shepherd is meant to empathic

6. He urged all the people closer to Buhari and senators to pass the information to them.

7.He also said that PDP want to come back after 16yrs of misrule.He told them to bury their head in shame,kneel down and beg Nigerians. They have no reasons to come back.

8. He also said that the amount of looting ongoing in Buhari’s administration as revealed spiritually is too much.