7 days in the dark: How the Thailand cave search unfolded

(CNN)Around 1 p.m. last Saturday, the weather was clear when Prajak Sutham, 14, Pipat Bhodi, 15, and some of their soccer teammates chained their bikes to a rail, hooked their backpacks over their shoulders, and hiked into Tham Luang Nang Non cave in the mountains of northern Thailand.

The 12 boys, members of the Wild Boars soccer team, and their 25-year-old coach, had explored inside the cave before.
Popular with tourists, it’s a place locals know well. For the first kilometer (0.6 miles) or so inside the cavernous entrance, limestone rock formations hug high ceilings, creating an almost amphitheater-like atmosphere.
Members of the Wild Boars soccer team pose for a group photo earlier this month.
Deeper inside, the passages narrow into places the locals warn it’s not safe to go.
For reasons unknown, the boys and their coach ventured on, deeper into the cave network, past signs that warn people not to enter during the rainy season, which usually begins in July.
They forged ahead as the ceilings dropped and the pathways contracted. They’d clocked three kilometers (1.8 miles) by the time they reached a fork in the passageway. To the left, a longer trek, but an exit point at the end.
To the right, higher ground, where a chimney-like chute made of rock jutting straight up out of the mountain was the only way out.
They took off their backpacks and their shoes. Outside, it began to rain. 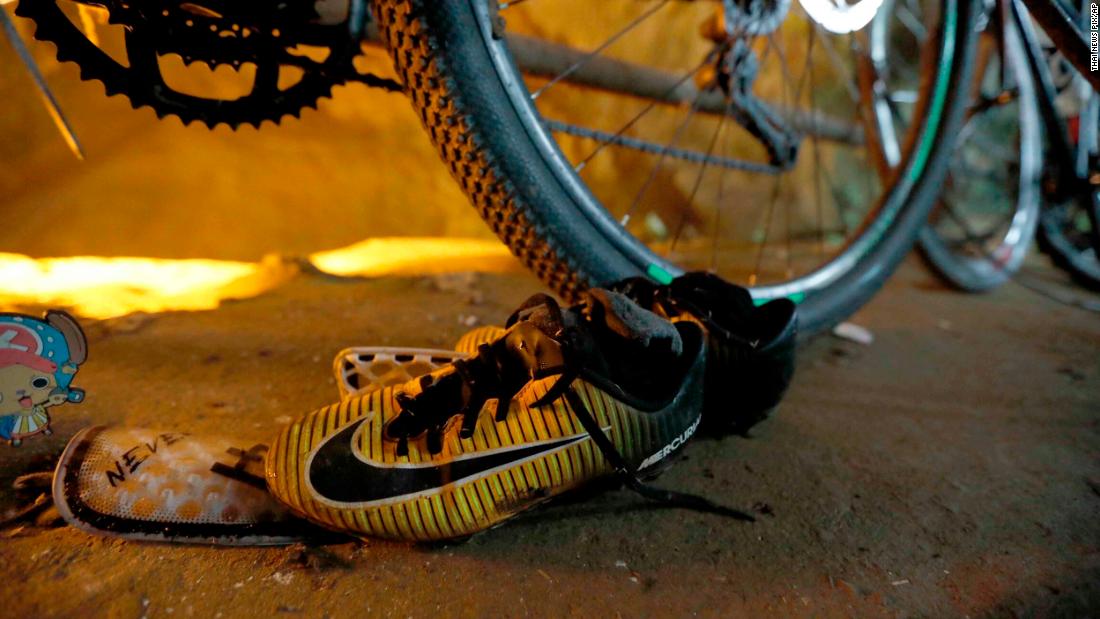 A pair of soccer shoes left at the entrance of the Tham Luang Nang Non caves.
It was hours later that a ranger from the national park in Chiang Rai Province alerted authorities, when he noticed the bikes still chained up after the park had closed. Search and rescue efforts began soon after.
The boys, aged between 11 and 16, and their coach, have now been missing for a week. Emergency services working frantically to find them have spent the past few days dropping food down holes they find in the jungle-covered mountain in the hope it connects with the caves below.
Volunteers help pump water out of the cave entrance. Search and rescue teams from the US military have arrived at the Thai government’s request to help with the effort, along with British underwater cave experts.
Thai Navy Seals with diving gear have swum some five kilometers (3 miles) into the pitch-black passageways to try to find the boys and returned without a sense of where they might be. There’s not been a sound from the missing boys all this time.
Their families are frantic.
“When I saw his bike parked inside the cave (entrance) my tears just dropped,” said Pipat’s father Pinyo Bhodi. “I was desperate to find my son.”
In the vigils that have grown with every day of fruitless searches, families and friends have prayed, made offerings, and held fast to the possibility of signs of life. Some, enduring the torture of such a long, silent wait, have collapsed in the mud with exhaustion, and been sent to hospital.
“I feel I have just lost my heart when I found his bag, mobile phone and his shoes,” said Prajak Sutham’s father Sudsakorn. “But all I can do is wait.”
The boys are close to each other and their coach, said Noppadon Kanthawong, one parent whose son plays on the team, but who’d decided to skip Saturday’s cave trip.
“He would be there at the field waiting for the kids to show up after school,” he told CNN. “It’s a great way to keep healthy, away from screens, and have friends. I can tell that they are very close to each other,” Noppadon said.
Noppadon and his son huddled with other teammates at the entrance to the cave, waiting for any word on the rest of the Wild Boars team. 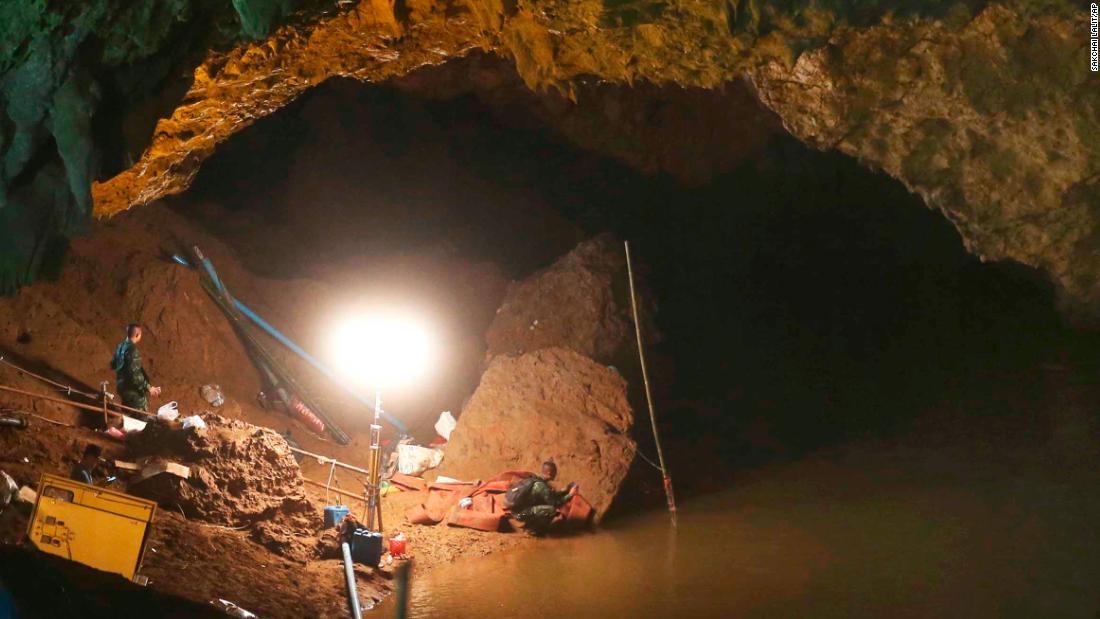 Thai soldiers walk out of the entrance to the Tham Luang Nang Non cave, Friday, June 29.
Meanwhile, the rain continued to beat down, preventing helicopters from searching for possible hidden entry points, and drones from sweeping the 10 kilometers (6 miles) stretch looking for heat signatures.
Even as workers pumped water and mud out of the cave, the rain persisted, complicating efforts. Vernon Unsworth, a British caver and longtime resident in Chiang Rai, who has explored the cave before, told CNN water was the greatest danger.
“Physically, it’s not a hard cave, it’s just very long and it has big passages, small passages,” he said. “It’s not difficult but if the children have gone in too far then the floodwaters from the far end will be coming through. With the rain, it’s not making it any easier.”
He added that oxgyen levels in the cave would be dangerous if the flow of air was incapacitated by rising water levels. 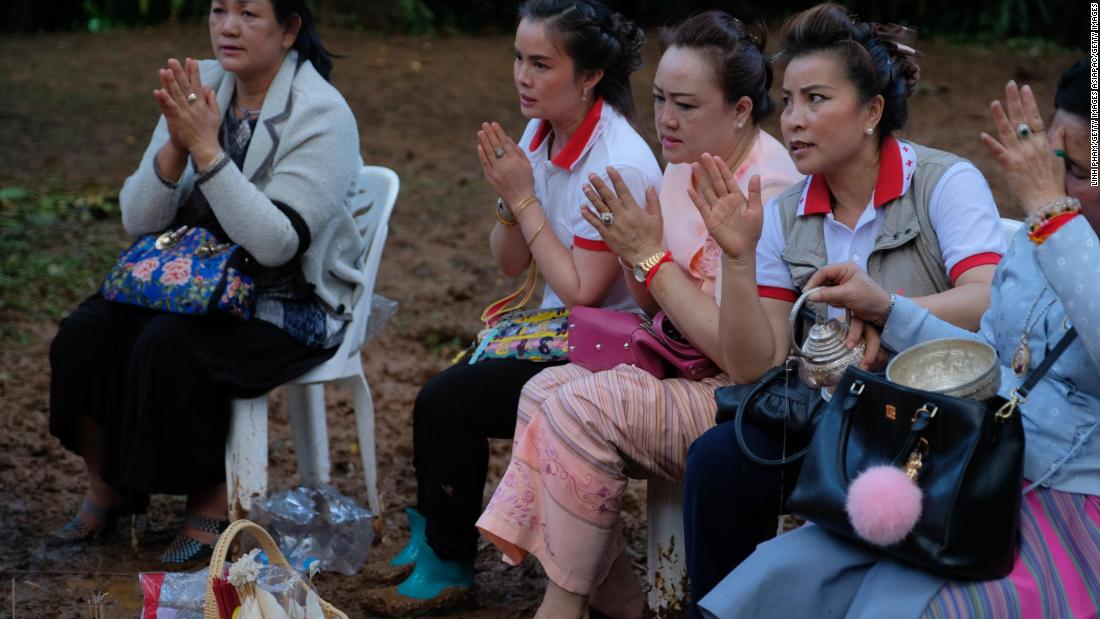 Buddhist followers pray at the entrance of Tham Luang Nang Non caves in the hope of finding the boys alive.
On Friday, Thai Prime Minister Prayut Chan-o-cha visited the rescue site, where some 840 soldiers, 90 members of a special forces unit, four helicopters, excavators and disaster relief equipment have been dedicated to the rescue effort.
Thailand’s energy ministry said it would supply drills for an operation focused on creating cavities in the side of the mountain to try to locate the team. The environment ministry said it would donate x-ray machines for scanning purposes.
On Friday morning, workers said a narrow opening in the hills above the cave might be a potential access point.
British cave experts entered the natural chimney Friday morning and managed to descend to a depth of about 20 meters (65 feet). Rescuers believe dropping in from above is a more promising option to reach the tunnels because it is not blocked by floodwaters. 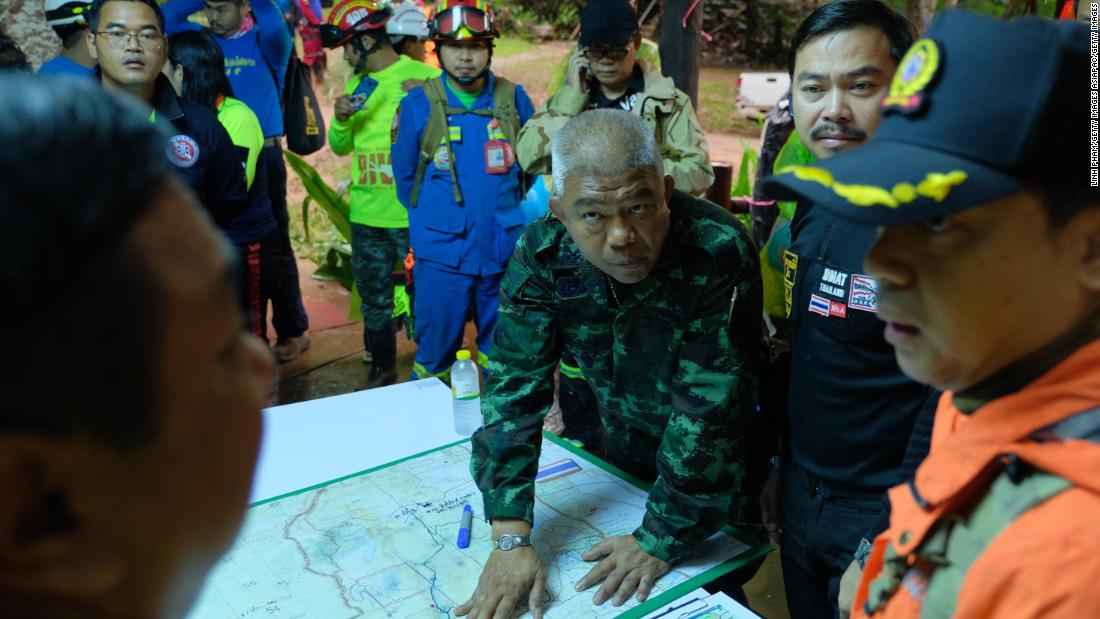 Thai officials plan over a map of the Tham Luang Nang Non caves.
Water pumps, brought from the capital of Bangkok and designed to alleviate major flooding in the city, have been working relentlessly to ease water levels inside the passageways.
Chiang Rai Governor Narongsak Osotthanakorn told CNN the heavy duty water pumps have made a difference, but the rain continues to be a significant factor.
“We are in the rainy season, but the amount of rain we are facing is very unusual. It rained (on June 27) from 8 p.m. until 1 a.m. Our teams who were working inside the cave had to withdraw to the mouth of the cave,” he said. “We just can’t fight with the water.”
It’s not the first time people have disappeared inside the cave for an extended period of time — and survived. 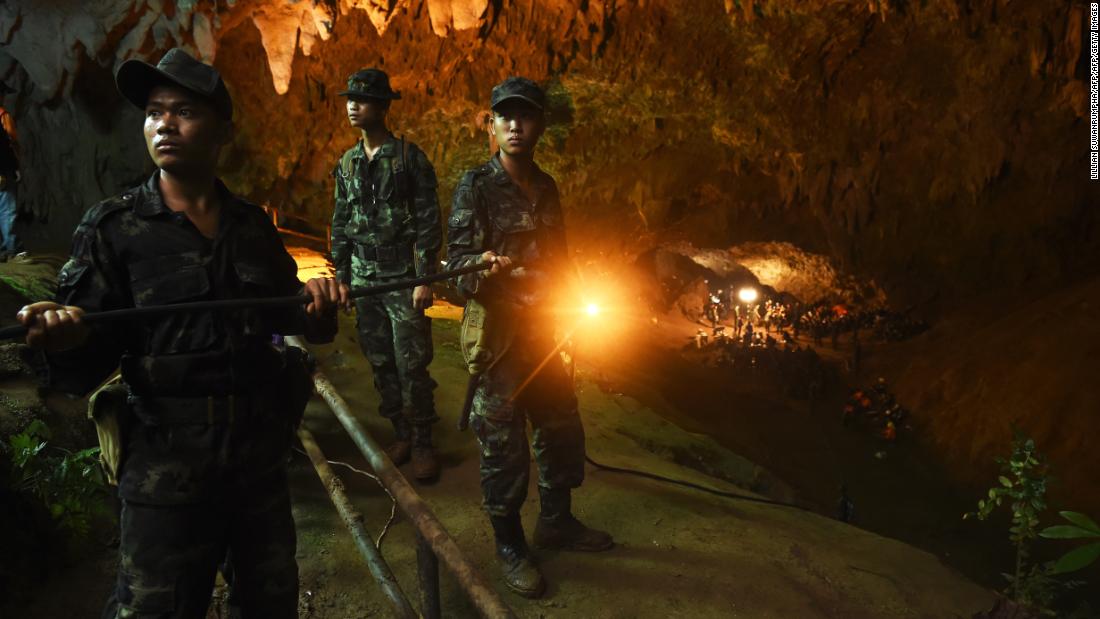 Thai soldiers relay electric cable deep into the entrance of the Tham Luang Nang Non cave network.
According to unconfirmed local news reports, a former village headman in the area of Tham Luang said that in 1974, a group of foreign hikers had become trapped in the same cave for seven days. However conditions then were dry.
Narongsak was still hopeful that even after seven days, with so many elements against them, the boys and their coach will survive.
“We have hope they are alive,” he said. “If you asked me if they are alive, I would say we have hope.”
Pipat Bhodi had a birthday last Sunday. His father Pinyo told CNN that the family had planned a surprise party for Pipat. A cake for the birthday boy remains untouched.
“We need a miracle,” Pipat’s father Pinyo said. “I want him back.”
Source: CNN  https://edition.cnn.com/2018/06/29/asia/search-thai-cave-boys-intl/index.html